According to the reports, both Ripple and Federal Bank has signed an agreement of partnership. The tie-up will facilitate Federal Bank to enjoy new corridors such as ‘new cross-border payment system’. Moreover, it was reported that the partnership announcement let Federal Bank’s shares soar 52-week higher on March 29. 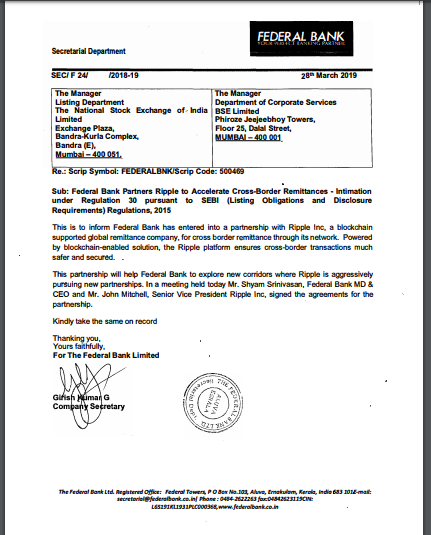 Ripple is no-doubt a famous blockchain firm when it comes to partnership with payment and fintech firms – as such it is defeating the long-established rival, SWIFT. Federal Bank’s announcement presented in PDF format, endorsing Ripple. It says that Ripple offers ‘Safer and secured’ remittance mode for banks. The agreement document that was signed by Girish Kumar G, company secretary states as follows;

This is to inform Federal Bank has entered into a partnership with Ripple Inc, a blockchain supported global remittance company, for cross border remittance through its network, read the report.

While at one hand, Government is reluctant to finalize anything on crypto aspects in India – on the other hand, Indian Federal Bank with headquartered in Kerala (State of India) optimistically entered into the blockchain space. The bank runs with 70 years of history and having 1251 branches with over 1655 ATMs and 258 cash recyclers across the country.