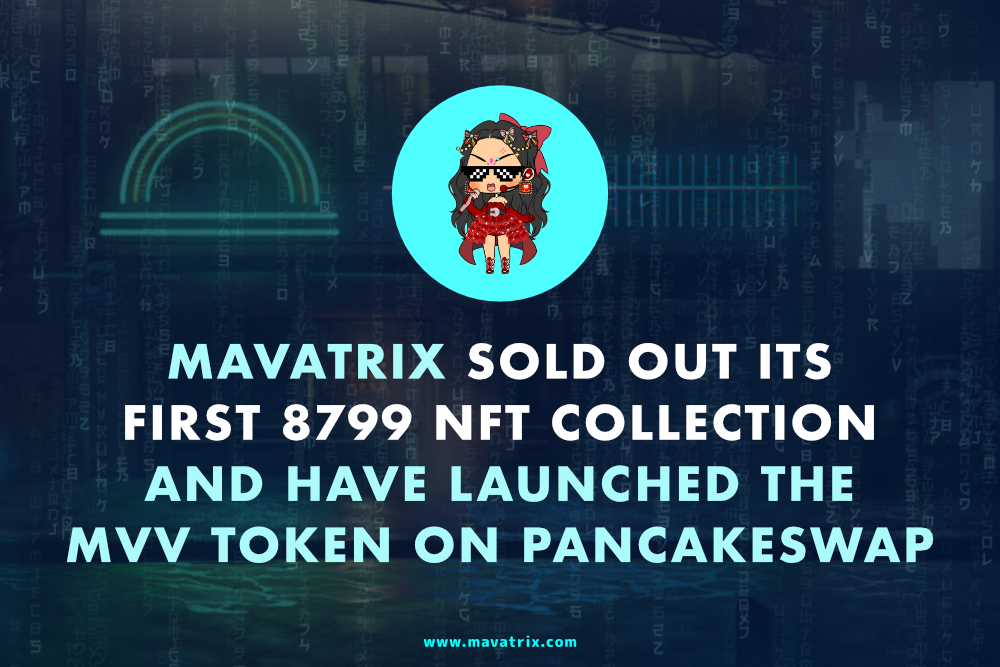 Mavatrix, the first reward-based Non-Fungible Token collection on Binance Smart Chain, has concluded the minting of its first collection of NFTs as of January 28th.

The collection was launched in late December and included 8,799 unique ‘Mavatars’, original NFT characters inspired by the Japanese chibi art style, which have now all been pre-sold to public and private investors.

About the achievement, Mavatrix’s founder Giulio Gagliano says “I would like to thank everyone who joined early into Mavatrix’s journey. Having successfully sold-out almost nine thousand unique NFTs in just a little over a month, we are now certain about the ability of Mavatrix to project confidence in its investors”.

On top of ownership of the NFT, buyers will also participate in a reward pool generated by Mavatrix to collect royalties coming from DeFi transactions of their token, MVV.

The MVV token is based on the standard BEP20 of Binance, and it launched on PancakeSwap on February 2nd. Moreover, owners will soon be able to access a dedicated section of the official website of Mavatrix in which, using their crypto wallet, they will be able to see their NFTs and find out their attributes, such as rarity and rewards capacity.

Owners of the collection will be able to claim their cumulated rewards starting from March 1st, 2022. After this date, claims will be possible every 24 hours.

What’s next for the project?

Mavatrix is currently at work on its first play-to-earn game. Giulio Gagliano, the project founder, describes it as a “community-driven, interactive hub of Gacha games that will use the blockchain and NFT technologies to allow its users to play mini-games, and battle with each other while earning tokens”.

As the game project is developing alongside its community, Mavatrix welcomes any interested parties to join the conversation on their Discord server.

Founded by entrepreneur & blockchain advisor Giulio Gagliano, Mavatrix is an international team comprising veterans from the Fintech and gaming industries with the goal of closing the gap between NFT enthusiasts and players of video games.

More information about Mavatrix is available on its Litepaper.