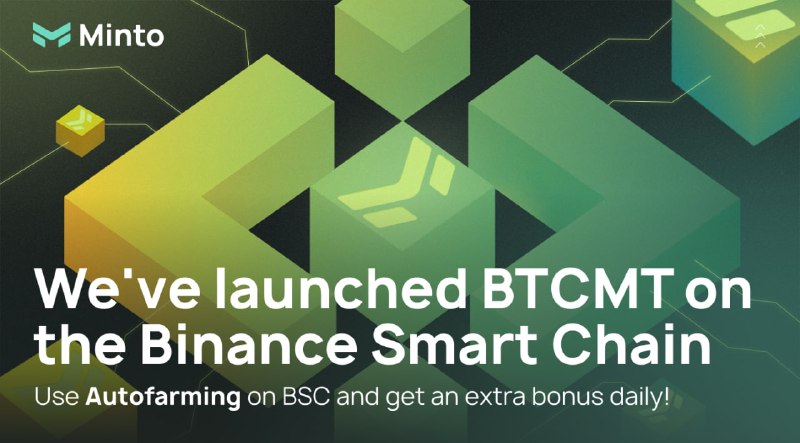 On June 09, 2022, Minto launched the BTCMT token on the BSC (Binance Smart Chain). Initially, the project was implemented on the HECO (Huobi Eco Chain) network, now users can work with BTCMT tokens in the Binance ecosystem, which will certainly contribute to the increased popularity of the Minto project among the clients of one of the largest and most popular cryptocurrency exchanges.

Minto offers a new network switching capability in its decentralized application (Minto DApp), where two smart contracts now exist simultaneously, one of them managing tokens in the HRC-20 standard (HECO), and the other – in the BEP-20 (BSC). The user can choose the most familiar form of BTCMT token ownership, depending on their habits and capabilities, for example, based on experience in working with a particular cryptocurrency exchange (Binance or Huobi Global), managing the corresponding digital assets, using wallets with the support of any one network.

At the same time, cryptocurrency wallet integration today allows users to work with digital assets of almost any blockchains, converting tokens both within one blockchain and between different ones. So, on December 12, 2021, Minto announced a partnership with the BitKeep wallet, which allows managing assets in almost all major blockchains. BitKeep offers built-in BKSwap and BKBridge services for intra- and cross-chain conversions.

When buying BTCMT tokens of the BEP-20 standard (on the BSC network), the user receives a similar set of services to what has been available on the HECO network so far, namely staking, withdrawal, daily rewards, autofarming, statistics, and history. This also opens up the possibility of converting BTCMT tokens on the decentralized PancakeSwap exchange on the BSC network. The purchase of BTCMT tokens in Binance Smart Chain is technically carried out in the same way as on HECO, however, in order to proceed, the buyer needs to have USDT on BEP-20 and BNB (to pay the commission) in the wallet, which is similar to using USDT on HECO and HT (Huobi Token) in the wallet when buying BTCMT on the HECO network.

The overall project indicators remain the same: the issue will comprise 5.5 million tokens, which corresponds to 55 PH/s of a hashrate, but BTCMT tokens will be issued not only on the HECO network, but also on BSC. The total daily reward from the entire project is still within the current trend, but will be distributed according to contracts in various blockchains. End users’ rewards remain dependent solely on the number of staked BTCMT tokens and in no way depend on the type of blockchain or the number of blockchains where the project is implemented. Statistical data for each contract (for example, TVL) will be provided separately.

The Minto project emphasizes that mining rewards within the project are paid out FROM THE TOTAL project mining power and ONLY in Bitcoins. Bitcoins received as rewards are issued on the same network as BTCMT tokens, and can be easily converted into another network or into any other digital asset. So, when staking BTCMT tokens on HECO, the user receives rewards in HBTC tokens (Bitcoin on the HECO network, HRC-20 protocol), and when staking BTCMT on BSC is in BTCB, Bitcoins issued on the Binance Smart Chain (BEP-20 protocol).

The Minto team looks to the future with the greatest optimism and is very happy to have the opportunity to introduce its unique product to the extensive BSC audience. Minto would also like to remind everyone that due to the expansion of the project functionality, it is now very important for users to pay special attention to all transactions and correctly choose the network when transferring project assets between addresses!