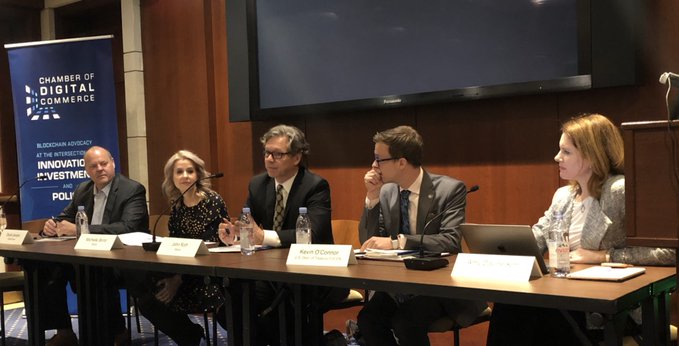 During a panel discussion at the Chamber of Digital Commerce on October 21, 2019, Michelle Bond, Ripple’s global head of government relations talked about the present and possible future development in regulation and legislation in the crypto-asset expanse. Michelle Bond stated that Ripple has been operating for the last 7 years in the regulated space.

“We’re actively engaged with 50 governments worldwide, making sure to comply with all AML, BSA, CFT and other requirements.”

She also asserted that there is misapprehension as to how Blockchain isn’t regulated. Also, she holds a BitLicense from the New York State Department of Financial Services, moreover she also has a Money Service Business Licence with FinCEN. Moreover, she did speak about how the entities Ripple partners with are all monitored financial institutions like banks and payment providers that have their own FinCEN and AML requirements and are not consumer-facing.

“We very much operate within the regulated framework. We also partner with exchanges that are regulated as money services business and registered with FinCEN.”

During the panel discussion, she uttered that before onboarding the client, Ripple conducts its own set of checks to make sure that they follow with the necessary prerequisites and to ensure the client maintains best practices, Ripple makes them sign a licensing agreement.

When the topic shifted to legislative initiatives, Michelle said that at the moment they are focusing on the classification, enhancements and anti-money laundering of digital assets. She also spoke about a few unsettled legislation initiatives that are supported by Ripple.

“We welcome seeing legislation that’s pending, for example, the Token Taxonomy Act. There has been a lot of legislative activity in the AML space as well that has focused on technological enhancements designed to help government agencies.”

Among the other initiatives, she talked about various Innovation to Assist Law Enforcement Bill which requires to use the now emerging technologies like Blockchain, digital identity, and Artificial Intelligence to help them in doing their work.

“We encourage FinCEN to use [these technologies] so they can internalize it, conduct a study and submit reports to the senate banking committee, using these technologies for the benefit of the government.”

Another amusing bill that was mentioned was concerning the Department of Homeland Security, which is now awaiting Senate consideration and has already been passed. This bill enables DHS to study of individuals using Digital currencies and Blockchain to finance terrorism and many such illegal activities.

“FinCEN has really been a leader in this space, but the issue we’re seeing as a company is that the broader crypto-asset framework in the U.S. does not work,… and is really related to the classification of digital assets. The Howey Test has been expanded from 4 factors to 38 factors, so there has been regulatory confusion, and a lot of clarity is needed.”

She even spoke about how Hester Peirce, SEC Commissioner referring to the guidance which was provided by them during April, called it the “Jackson Pollock Painting Approach” and how this confusion has been a boulder for the industry.

“We understand and appreciate that the SEC is trying to issue guidance — it has been difficult. I do think that they CFTC under chairman Heath Tarbert has been great, we’ve been encouraged to see that he’s highlighting and raising the importance of regulation in this space and continuing with former chairman Carlos’ initiatives.”