XRP adoption is on boom! After the successful integration of XRP with WooCommerce platform, users can now send the third largest cryptocurrency via Microsoft outlook.

After the successful completion, Wietse Wind is all send to support XRP on Microsoft Outlook by through XRPtipbot. Reportedly, a developer called SchlaubiD has integrated XRPtipbot API into Microsoft outlook as an add-on. The integration of API lets the user send XRP to anyone via email – in fact, the recipient without an XRP address can also access the crypto. 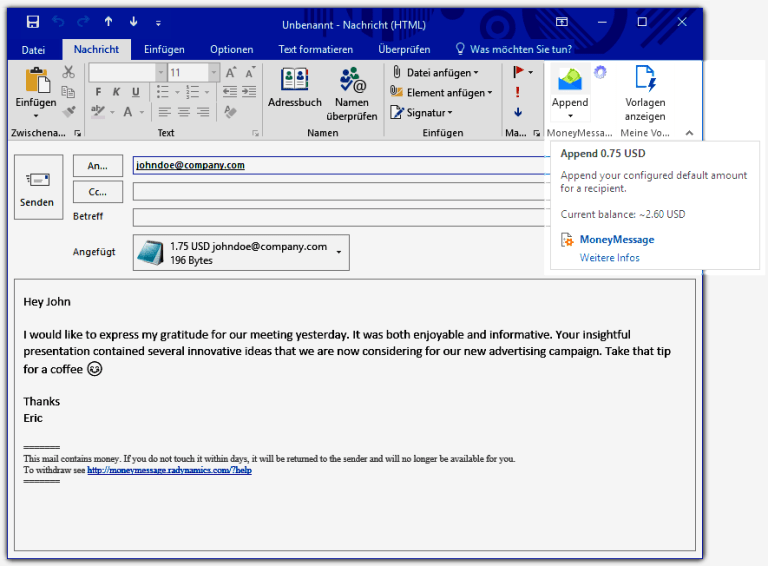 At present, the API add-on is available on Microsoft outlook 2016 with support for Office 365 – further, the developer is intending to bring such features on regular Gmail via an extension. So-called Add-on or Add-in (as per the reports) for Microsoft outlook is named as Money Message. The reports read that;

“MoneyMessage is an AddIn for Microsoft Outlook which allows you to append money in form of XRP (Cryptocurrency) and send it to any mail receiver. A receiver doesn’t need an account or knowledge about Cryptocurrencies. The amount will be deposited in XRPTipBot witch allows your receiver to withdraw at any time. MoneyMessage has a strong focus on applications that simplify day-to-day work. People should not have to worry about technical implementations.”

What do you think of XRP at the next phase? would you like to see the same feature in Gmail as well? share your thoughts with us