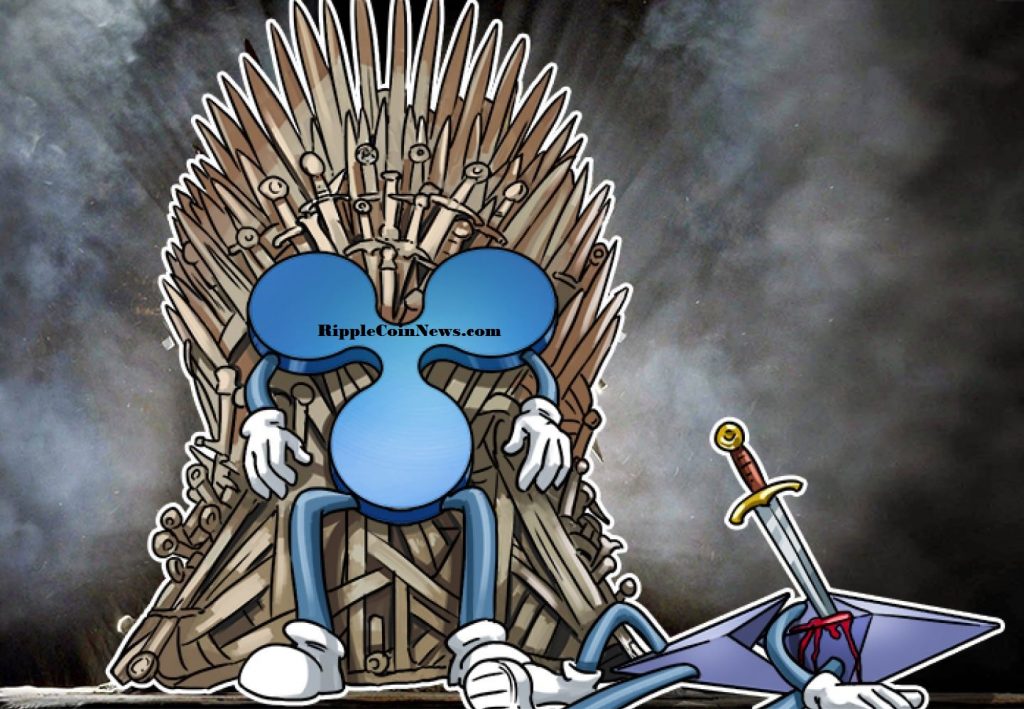 Recently, more and more people are using the term market cap as an argument against the rise in the XRP price. I’ve done a more thorough research on this issue. Is it a correct argument from those who use it? We will see the answer in this article, and at the end you will form an opinion. This article was written especially for those who have a little experience in the Crypto market and use the market cap. I’ve made a short description below for those who do not know the significance of the market cap.

Here’s how Investopedia market cap is defined: “Market capitalization is just a fancy name for a straightforward concept: it’s the market value of a company’s outstanding shares.” I fully agree with this characterization.

Market cap, or capitalization is the market value of all currencies. It is calculated by multiplying the number of coins with the current currency price.

The capitalization calculation is simple, starting from this formula:

For example, if a currency is quoted at $78 and the total number of coins is 10 million, then its capitalization will be $780  million.

After knowing how the market cap is calculated,  let’s get to the study.

Generally, in the Crypto market, the formula of the market cap is used to be seen reaching the target price by comparison with BTC or other foreign companies, if possible in the future. In this formula, we will introduce the target price at which we think the currency could be instead of the current price. In this way, we will have a market cap. The market cap that will result from the calculation will be compared to the Bitcoin market cap, or other companies listed on the Stock Market. Thereby, we can realize whether our price target is realistic or not.

Why do we have this very big difference in the market cap XRP? On the coinmarketcap.com site, the market cap calculation is done using “circulating supply” while on the official Ripple site it is calculated using the “total number of coins currently in place”.

In conclusion, many refer to a large XRP market cap, because they do the calculation using the 99 billion formula. In fact, the circulating currency is about 38 billion.

What would be the correct calculation? I do not know exactly, but in order to have some equal reference data, we will use the formula on coinmarketcap.com with “circulating supply” in the next article, given that the BTC market cap is still calculated in this way.

The most common sentence I hear in Forums  is the following:

“XRP will never reach the $1 price because it should have a $38 billion dollar market cap.”

This $38 billion would be a bigger market than ETH, at present about $30 billion. We know very well that in May, for a short period of time, XRP was second on the market cap surpassing ETH at that time.

I would like to note that the formula of the market cap contains a variable element: the price.

If the price increases   >  Grows and Market Cap

In this relationship, the Bitcoin market cap and the Crypto market market cap all function.

This figure represents a more than 850% increase from their value of 17.7 billion at the beginning of this year. Currently, there are more than 60 hedge funds that focus on these currencies, according to data provided by the Fintech analytics firm Autonomous NEXT and reported by Business Insider.

In conclusion, if XRP would reach the 2$ price, it should have a market cap a bit bigger than the current BTC market cap, or $76 billion. BTC’s current market share is $75 billion. Perhaps some of those who read this article believe these figures are utopian.

We can say that these figures are, at the moment, pure speculation. However, if Ripple gives us the news so soon, these calculations can become reality.

We have to be very objective and realistic when we use market cap. It’s true, we can not believe that XRP will be 1,000$ in the future. We should have a huge market cap. But the limiting thought that XRP can not reach 2$ because the market cap is not good.

How much was BTC’s market cap when it was $100? Using this type of limiting, market-based thinking, many people sold BTC and were satisfied with a small profit. Over a number of years, they realized they had made the biggest mistake of their lives.

Let me tell you a secret. It is known that a low priced and low cap share will yield a much better annual return than the top-ranked companies that are expensive and market-leading. On the stock market, some investors are looking for low priced equity companies. If they are good and fundamentally, they will buy those shares.

It is known that a low-priced and small-market share will yield a much better annual return than the top-ranked companies with a high market share. Does XRP have the necessary skills to be bought by a lot of investors on the stock exchange who would like to get better randame? Undoubtedly, the answer is affirmative.

Now I would propose you an exercise of imagination. I have a top market ranking of the top 10 companies in the world. The figures under “Market cap” are in billions of dollars. Do you realize where XRP and BTC are located by comparing them with these top 10 companies in the world? It should be remembered that the two coins have huge potential to attract money. Market cap XRP now represents about 1% of Apple’s market cap. BTC now represents 9% of Apple’s market cap.

Now you’ve seen where XRP and BTC are in comparison with the best ones. Maybe none of them will reach the top 10 places. I think they have all the chances to get into the top 20 market cap in the future. How many years will the two coins need to get in this top? Hard to estimate. We will see.