There is no doubt that XRP cryptocurrency has the most active and large community in the crypto space. Often this community is known as XRP Army who doesn’t just cheers for the project but boosts the adoption of it.

Similarly, a group of XRP community is expecting Skype, a famous telecommunication application to integrate XRP as micropayment system. Curiously, they drafted a post on Skype’s uservoice (as a new idea on Skype customer feedback) and elaborated their prospect by detailing the key aspects of why and how should Skype consider XRP as micropayments. They excitedly noted;

Allow us to buy SkypeCredits with XRP TipBoat, allow us to send micros payments on Skype chat as well.

It was suggested by a user (David) on March 20 which reads as follows; 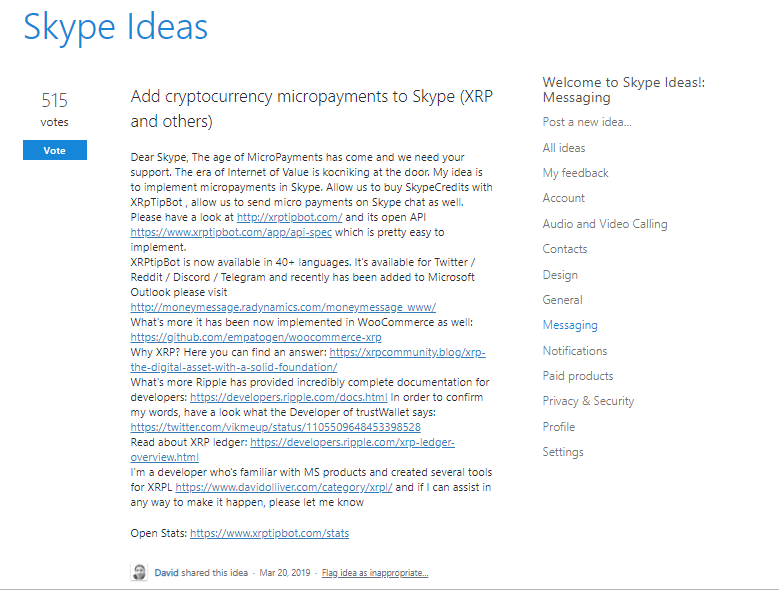 At present, the suggested idea is voted by 515 members and stand on the hot section of Skype’s uservoice domain. Many XRP enthusiasts also commented in favor of the idea and keenly seeking out the positive response. David further referred XRP TipBoat’s latest integration and stated;

XRPtipBot is now available in 40+ languages. It’s available for Twitter / Reddit / Discord / Telegram and recently has been added to Microsoft Outlook, please

Hi. Thanks for sharing this Idea! Cryptocurrency micropayments sound really cool right 🙂 Like any other leading technology company Microsoft is already testing blockchain.
Although I don’t have any information about cryptocurrency adoption for Skype or any other MS product, please keep continuing supporting this Idea. I will share it with our teams 🙂
Note: I’ve edited the title of this Idea little bit so it fits cryptocurrencies generally 😉

Furthermore, XRP enthusiasts keep on inviting the large members from the community to vote on Skype and as such, a Twitter user (Paris by David, seems like the same person suggested an idea on Skype) took to Twitter and said ‘let’s make it happen’.

So readers, do you think Skype will implement Crypto as a micro-payment? what’s your view on XRP for SkypeCredit? share your thoughts