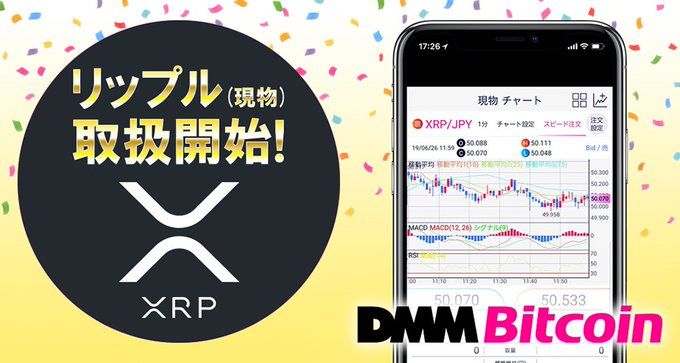 Announced on July 10, 2019, one of the famous Japanese crypto exchanges, DMM Bitcoin is supporting the third-largest cryptocurrency, XRP. Initially, it is paired with Japan’s fiat currency JPY (Japanese Yen). According to its announcement, the trading has already begun from July 10, 2019.

This exchange was launched back in 2018 as “DMM Bitcoin”. It was initiated with a plan to support 7 cryptocurrencies, 14 trading pairs and with the feature of margin trading. This exchange operates under the name of popular Japanese entertainment conglomerate DMM Group which is the operator of popular e-commerce site DMM.com.

DMM Bitcoin’s update of supporting XRP is quite exciting news for the whole XRP community. Subsequently, XRP member “CryptoEri” took to Twitter and adds that “there were over 700,000 downloads of the DMM trading app tied to an XRP promotional campaign”. The tweet posted on July 10 reads that;

More than 700,000 downloads of the DMM trading app tied to a XRP promotional campaign. Will cover this in a video today.

Despite this news, there’s no positive moment in the price of XRP. In fact, other altcoins also declining with the severe fall. At the press time, XRP is trading at the price $0.33 against USD by plunging at 15.39 percent over the past 24 hours.