XRP, the third-largest cryptocurrency is losing its value drastically. Many investors and community suggest that the XRP’s collapsing value might be a reflection of the company’s steadily sale of XRP. 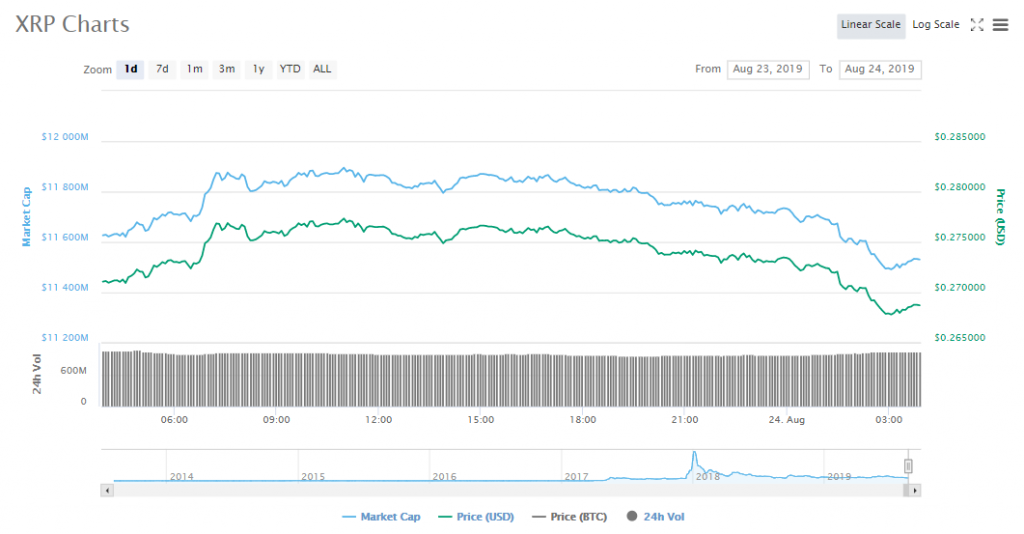 Although, Bitcoin’s fell out is already watering the trading cap of other cryptocurrencies, it has been noticed that the XRP in 2019 lost about 20% among other 10 largest tokens. While the company, Ripple appears on the hot bulletins with the global partnership and other updates, reports from CoinMetrics outlined that Ripple Labs’ Co-founder Jed McCaleb (who is no longer at Ripple) sells 500,000 XRP daily. Echoing the concern of Ripple’s sale of XRP, Kyle Samani, co-founder of crypto hedge fund Multicoin Capital I Austin, Texas, says;

“The company has been steadily increasing their sales of XRP over the previous three quarters, likely inflicting downward price pressure on XRP”.

Further on the topic, he adds; “Savvy investors have known this for some time; however, for whatever reason, the market is just now picking up the narrative and reacting.”

In quarter 2nd report, although Ripple claimed its sale of XRP, the firm disputes that they’re actually scaling back. On August 23, Bloomberg media cites Ripple’s view which stated that “the Programmatic sales of XRP as a percentage of volume and the actual supply inflation rate were lower” than for Bitcoin or Ether.

As per the report, Ripple claims that it has “substantially reduced XRP sales”. It mentioned that the sale had been aligned with the crypto exchanges and few of these exchanges were misreporting volumes. Concerning the quarterly report, Ripple kept on adding;

“We believe in being as transparent as possible. This transparency is unmatched in the crypto industry.”

On the other hand, CoinMetric’s analysis explains that Ripple’s quarterly report that shows the figure of XRP sale are differed from actual sales numbers “at least twice”.  Nic Carter, co-founder of tracker Coin Metrics elaborates that Ripple will not share any information in advance before it releases the amount from the escrow.

Echoing  the above concern, Eric Turner, the director of research at Messari added that;

“Ripple has been more aggressive in their selling lately,”