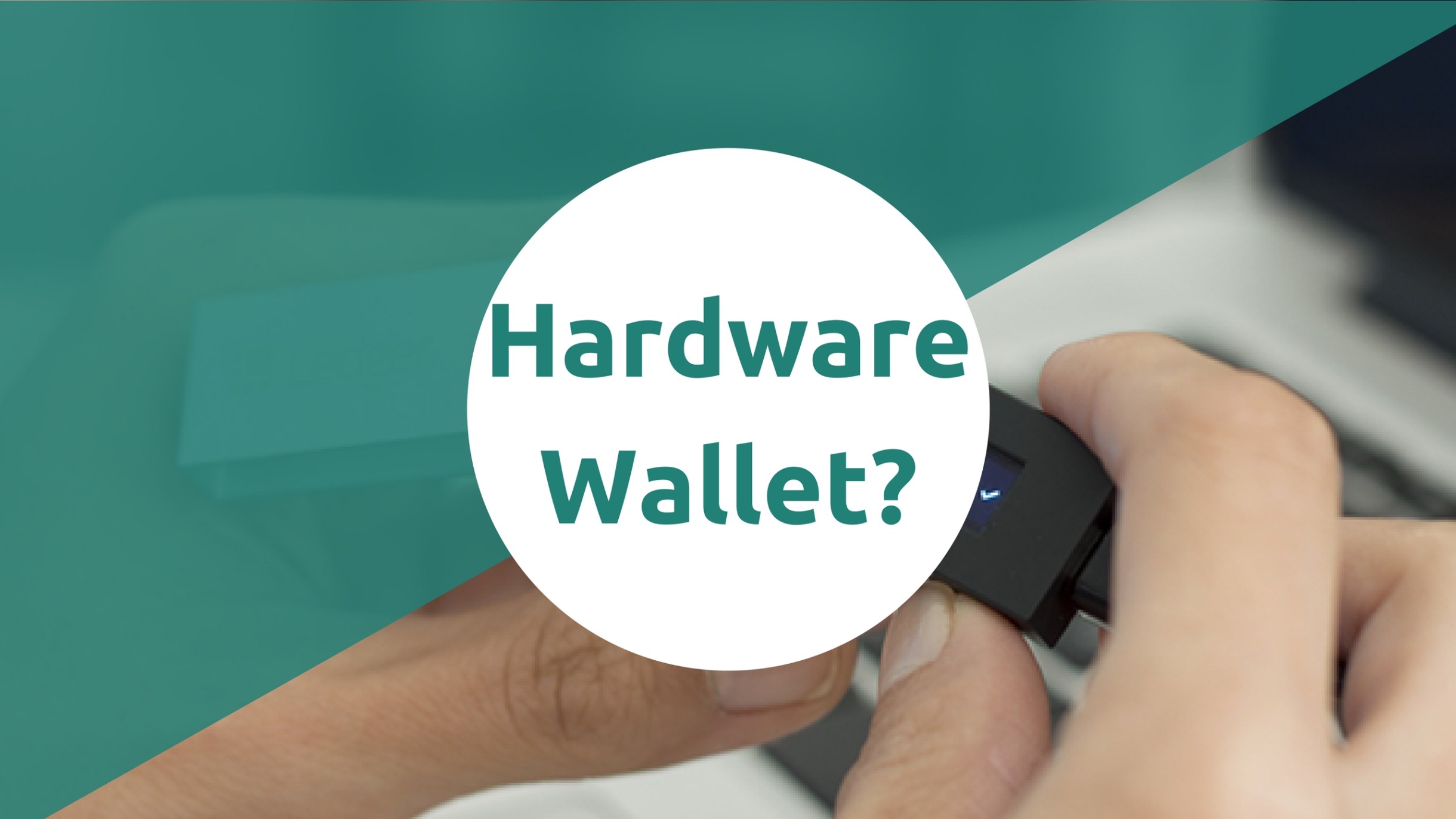 With most cryptocurrencies as Bitcoin printing record valuations, where you chose to store your hard-earned coins is of prime importance. There are many available options out there but hardware wallets or cold stores are certified secure and suitable for persons with huge amounts of coins desirous of pulling them out of circulation. Still, there might be other reasons why one may need a hard wallet. Aside from price, community wallet ratings and the number of coins supported, one may need to acquire a hardware wallet depending on his investment style or as a response to country-specific regulations.

Needless to say, the reputation and security of a wallet are key and from those selection criteria, here are the most reputable and best cryptocurrency hardware wallets:

You can search the internet for all a kind of reviews but all things constant, Ledger products are a cut above the rest. A stand out in their catalog is Ledger Nano s and there are many reasons why it is a standout. Yes, we can argue from a price perspective. Retailing at around $59, Ledger Nano S is comparatively cheaper than peers and way superior considering the number of coins and tokens they support. 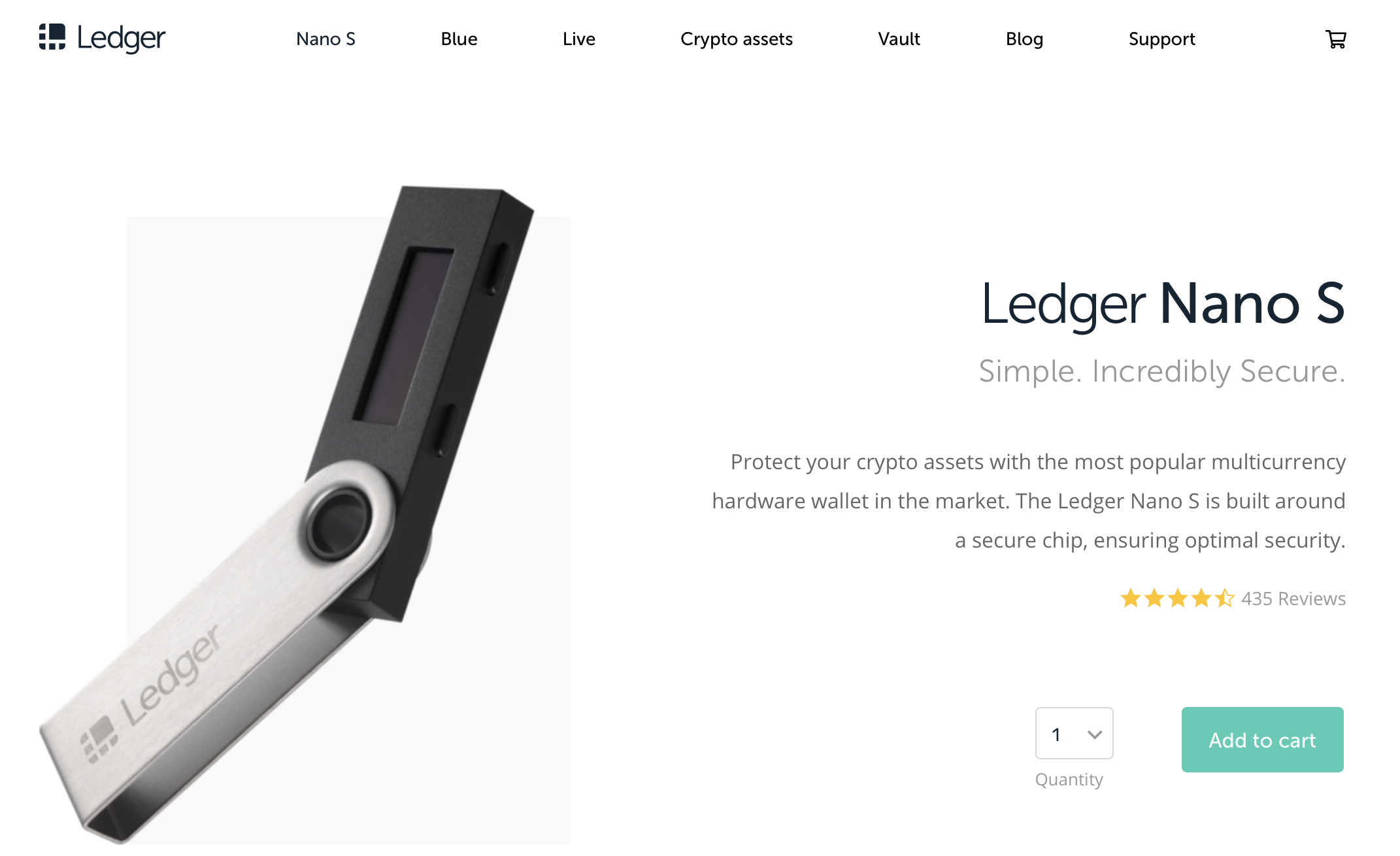 So, what exactly makes Ledger Nano S an on-demand cryptocurrency hardware wallet? Well, first, the rooting might be because it is a European start-up and after launching in 2015, Ledger has basically snowballed, adding attractive features. The device itself is lightweight, sleek and compact.

The exterior is made of plastic making it shock resistant when it drops. Ledger Nano S is battery-free meaning you need to first plug it into a computer before setting up. Though there are risks associated with this, the users must ensure that the computer is virus free though the gadget would still work. To facilitate this, the company provides a USB cable for connection and at the same time making the wallet more compatible with most computer operating systems as Linux, Windows, and Mac.

Ledger Nano S is also known for its security inclinations. Not only does the device has an OLED screen for checking transaction but the physical buttons which must be pressed when confirming transactions gives users another layer of protection.

It makes the hardware wallet hacker-proof since there is no way a hacker can press the button unless of course, he has physical access to the wallet. Besides private keys are stored within a different chipset in the device itself giving the coin that additional layer of protection.

Ledger wallet is basically one of the best hardware wallet. It is designed to store cryptocurrencies with massive security features. Crypto traders and investors passionately use ledger wallets for their cryptocurrency also praised by them. 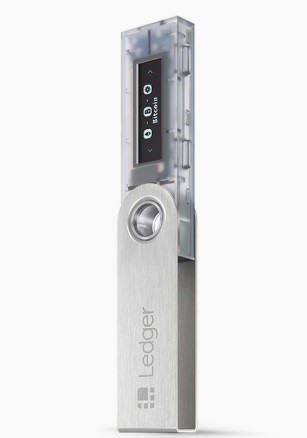 The ledger company which developed this wallet has exposure in creating security solutions for crypto and blockchain. It was founded in 2014 and has offices in San Francisco, Paris along with the team of approx. 130 employees.

Another stand out feature for Ledger Nano x is the number of coins supported. For you to get a hang of it, know that the wallet supports all ERC tokens when used in tow with MyEtherWallet. That basically means the wallet supports an infinite number of tokens aside from supporting other established coins like XRP, Tron, Bitcoin, Ethereum, Litecoin and all the top 30 most liquid coins.

Another unique feature is that Ledger Nano S is an HD (Hierarchical Deterministic) wallet meaning the owner of the gadget has full access of the account representing the coin and can even back up the key just in case there the device is stolen. That’s not all. Though you can back up your wallet via the initial recovery phrases needed when setting up, firmware update doesn’t demand a transfer of coins to external hardware or hot wallet. Updates are automated and once complete; no coins are lost.

Fortunately, the company has successfully raised investments of $85 million. If we talk about the user interface of the wallet it is very simple and easy to use. Ledger supports several coins such as Bitgo, MyEtherWallet, Copay and some others as well

Ledger is also a best ripple wallet in 2023 to store your XRP coins. you can also check our best IOTA wallets 2023 List 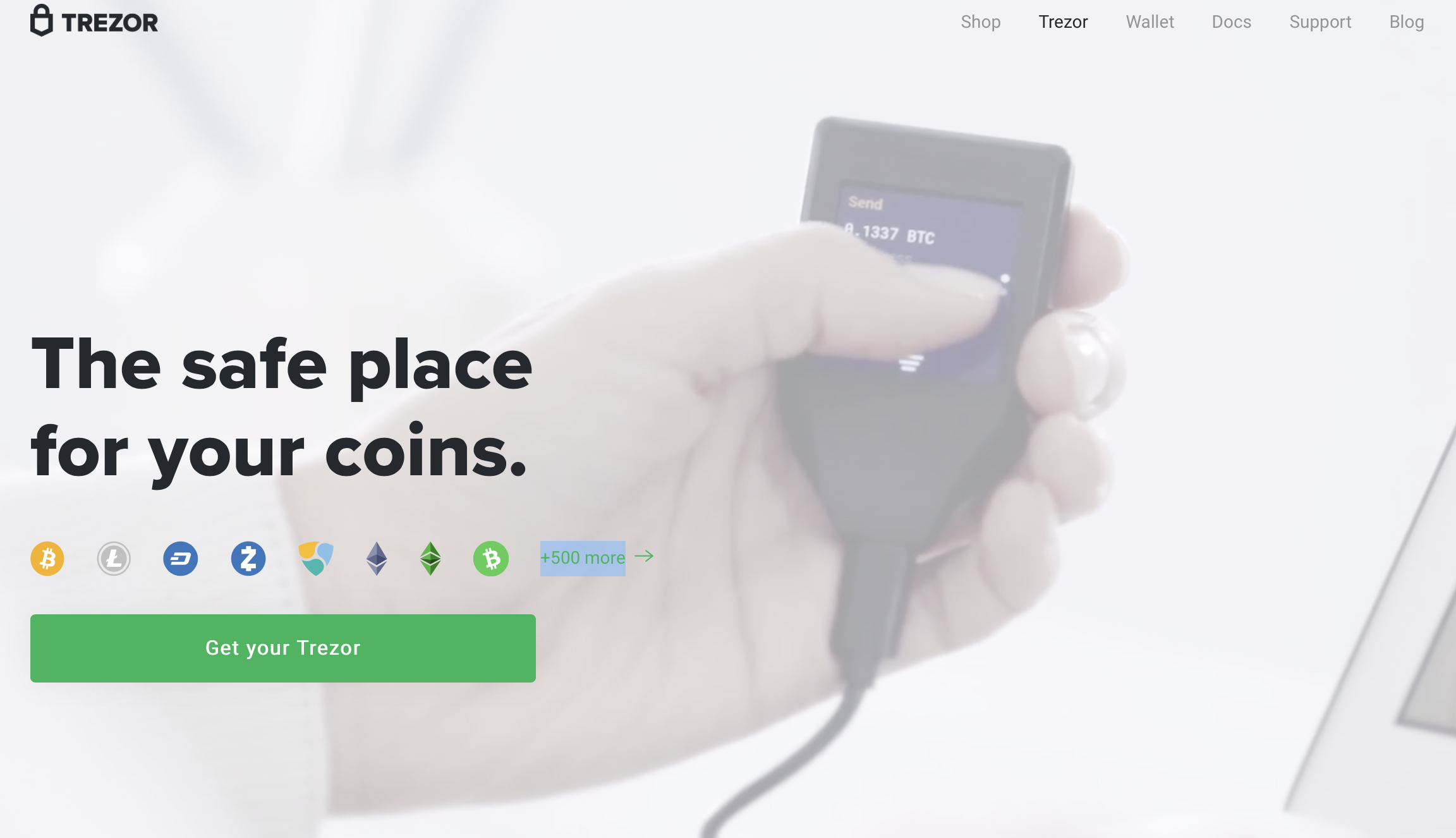 Competing with Ledger Nano S is Trezor, a creation of SatoshiLabs, a Czech start-up and the first Bitcoin wallet to ever hit the market. The wallet got the pioneer tag and many expected it to be the most dominant wallet but the thing is, the wallet is lagging though it remains the second most popular in the world. Retailing at around $100, Trezor is unique on its own.

Unlike Ledger Nano S and other Ledger products, Trezor offers a limited number of coin support adding only but a few coins since launching in 2013.

Then again, you can plug in your device to tablets and other Android operated devices but the company is working on enabling that. Regardless of their limited coin support, Trezor employs the same security tactic as Ledger Nano S storing Bitcoin’s private key offline in a different chipset. The only advantage that Trezor has over Ledger Nano is that its source code is open source and peer-reviewed and is easy to use.

Design-wise, the wallet is made of metal offering protection against physical damage. However, this is not where the real battle is.

Most users are desirous of storing their coins fast without any setup complexities. This is where Trezor races to the top. During set up—which can be executed either via myTrezor.com or through a Chrome extension, Trezor allows the wallet to be backed up by a 24-word recovery key with the word phrases generated offline via the RNG from both the computer and the gadget itself.

It won’t matter the state of the computer because Trezor is actually impervious to keyloggers and even when the computer is hacked, private keys won’t be accessible.

Additionally, you can add a passphrase to the recovery phrase but you must remember the passphrase failure to which you shall lose the wallet. Wallet recovery can be done via hot wallets as Mycelium for example.  For spending, users must have a four-digit pin code with all transaction confirmations visible on the screen and accent via a press button. Besides, Like Ledger Nano S, the wallet is HD supported, it means the users have control of the coin’s private keys. 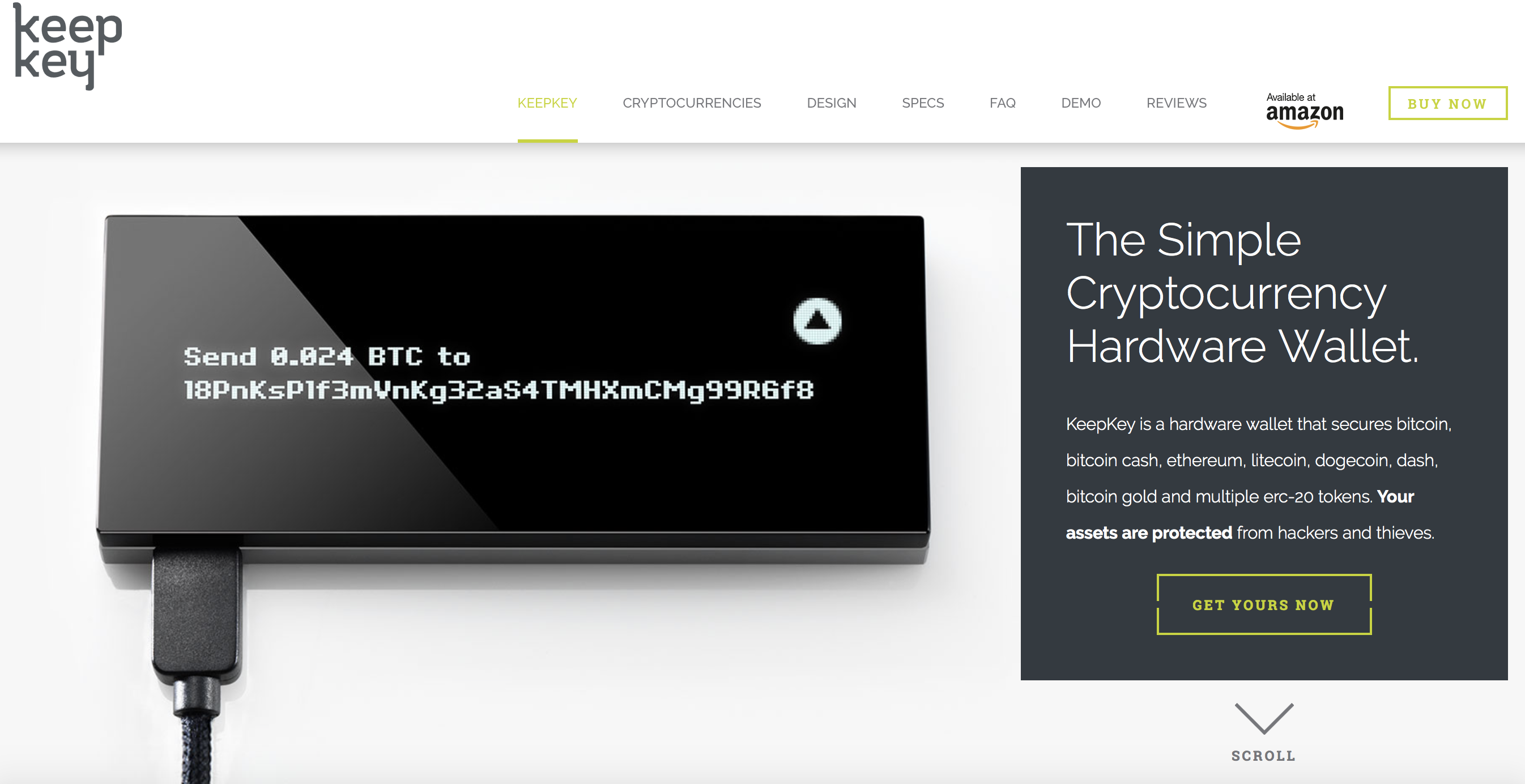 Keeping both Ledger and Satoshi Labs on toes is yet another sleek and secure hardware wallet that users can choose to store their hard-earned digital assets like Bitcoin and a host of other valuable cryptocurrencies.

keepKey Launched in 2015–and later acquired by ShapeShift, the wallet has evolved to be an on-demand gadget for users seeking a mix of style and security. At around $130, the wallet is out of range for most users but when they do pay the amount, they are guaranteed value for money.

First, it’s readily compatible with Windows, Linux, and Mac operating systems and because it was developed at the HID-Class category, the wallet can readily function in any OS once plugged. Besides, the wallet is hacker-proof mainly because there is no operating system installed on the wallet that can be infected. This gives users the freedom to run this wallet on any computer regardless of the state.

On the development front, the KeepKey source code is completely open-source and HD meaning users have full control of their private keys. The only downside that the company must work on is the creation of a web wallet that would eliminate the need for accessing apps via third-party wallets like Electrum.

On the upside though, there is no way hackers would steal your private keys since generation is done offline through entropy between the device the computer. Like the rest, there are options for restoring your wallet contents via a 12-word recovery phrase. The wallet also has a screen for transaction monitoring and a button for confirming those transactions.

As you can see, these wallets are backed by the community, are affordable and most importantly can support numerous coins and ERC tokens. From the list, Ledger Nano S is a standout and not because of price but from the number of coins/tokens supported. They are always of the lookout to incorporate with crypto creators and offer support drawing in extra demand for the wallet. Though their source code is not fully open-source, it still remains popular in the crypto-verse.