That Ripple’s XRP is lagging, underperforming the world’s leading cryptocurrency, Bitcoin is true and well, evident. Numbers don’t lie. However, it is more than prices and what is visible is an overextended consolidation. It is now stretching to its sixth month and what we have are extremely supportive fundamentals.

Not only is the Brave New Coin XRP Index retrievable under the ticker, XRPLX, via Google search, but there are multi-billion bank partnership with Ripple Inc that is, without  a shadow of doubt bullish. In fact, what Ripple Inc stands for is embodied in their solutions. According to Al Ahli bank CTO, because of efficiency and the connection that RippleNet brings, customers will notice speed. Besides, he adds that they will continue working with Ripple Inc since they share similar visions of changing the way banking should be done.

Even so, the deal is the utilization of RippleNet main product—xCurrent, a solution which though widely used, doesn’t leverage XRP but is simple an end-to-end messaging platform that adopting banks, at their volition, can upgrade to the latest version 4.0. As it is, there is a technical hitch demanding middleware reconfiguration for willing banks, a reason that is bogging down progress, as financial institutions, seeking for further regulatory clarity, aren’t willing to take. 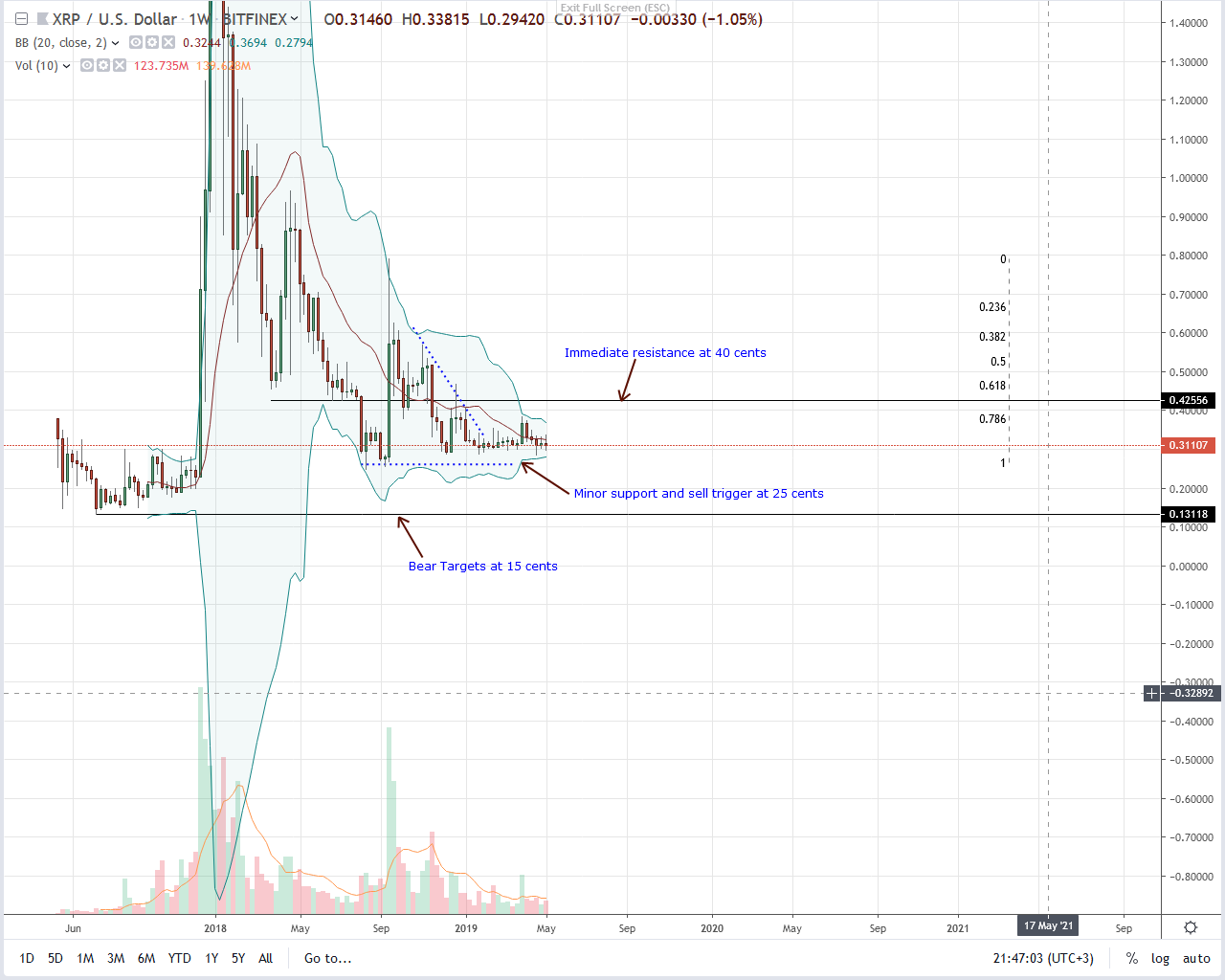 Apart from Binance Coin (BNB) and Stellar Lumens (XLM), Ripple (XRP) is the third worst performing asset in the top-10. Up a measly 2.3 percent in the last week, XRP is consolidating as aforementioned, with strong supports at 30 cents.

Although bulls are technically in control, oscillating within Sep 2018 high low and more specifically, the week ending Dec 23 high low, any close below 30 cents could see prices slide to 25 cents or lower in days ahead. However, for confirmation of May-11 bull bar, it is only after prices satisfactorily close above 40 cents that buyers can begin loading up on dips with first targets at 60 cents—Dec 2018 highs.

All the same, because of this accumulation and the rejection of lower lows at 30 cents—Q1 2019, traders should adopt a neutral but bullish approach until prices close above 40 cents complete with high transaction levels above exceeding recent averages of 145 million and 365 million of week ending Mar 30.